Cheikh had a stable job in a company in the Gambia. After he heard about China, he decided to leave in order to seek greener pastures.

In autumn 2014, many Gambian migrants tried to go to Hong Kong, after they had realized that China was a dead-end in terms of job opportunities. As a Gambian citizen, you didn’t need a visa for Hong Kong and could easily pass the border controls. Some of those who made it to Hong Kong – and from there to other destinations – kept in touch with those in China and shared their experiences. The stories of other Gambians working on construction sites in Hong Kong or Taiwan, for instance, inspired those in China to try their chance.

i wanted to try hong kong as my first target. I stayed for 10 days then i went to hong kong and i was refused entry and the hong kong immigration told me “my brother hong kong government say you will not enter today maybe someday”. I ask them but why they told me this an instruction from the hong kong government, they screen me very well and after that they wanted me to sign some documents which i refuse to sign. Later on they told me that office was supposed to close for work because i came with the last train. They told me let’s go the police station you spend the night there and i told them that am not going anywhere as far as you don’t want me to enter your country, i will not move an inch, i will stay here. Then the following morning, i return to mainland China. I stayed there with 3 immigration officers with me there until the following morning, they escort me to the train back to China. My passport was held by the train-captain until when i arrived in China. 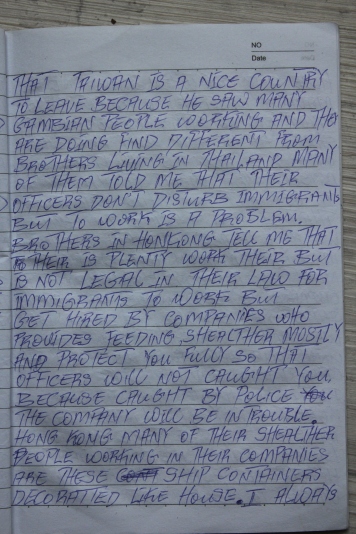 In December 2014, it became more difficult for Gambians to enter Hong Kong. They needed a visa to cross the border.

The migration agents in Guangzhou sold documents to the Gambians to prove to the Hong Kong immigration that they were genuine business men – pro forma air tickets, hotel reservations, forged receipts from purchases, business cars… In most cases, the Hong Kong immigration officers were not impressed by these documents and refused entry. The Gambians were returned to Mainland China, and their exit stamp cancelled.

The tense political and economic situation in the Gambia held some of the men back from returning.

Therefore we are looking for help to go to another country where by we can able to stay and have job so the we can replice the money we use to come to China for life in future otherwise, if we can see ourselves in Afroca or to our own countries some of us can loss life, jobs and maybe others become mad which none of is want to face this kind suation or probelm at this early stage as a young man less thirty to thirty five years, THANKS IN ADVANCE.

As plans to go to Hong Kong and Taiwan failed, Thailand turned out to be an alternative destination. The migrants who had already left for Thailand reported that they had regained freedom. They sent pictures and texts which incited new hope for those left in China. With the flights being comparably cheap and the visa ensuring a three months stay in the country, many Gambians finally proceeded to Thailand.

My wish is to go to Thailand to avoid over staying but without help i cannot say its impossible but the chances are very slim. My owing to the house owner is a great concerned to me as any minute i can be kick out of the house and i have no place to stay.

Nevertheless, going to Thailand did not depict an option for everyone.

Vegas having experienced the realities of overstaying for a few months, he finally chose to “surrender” to the police. There had been many rumours about where to surrender, as the Guangzhou police was known to be stricter than the one in Shenzhen or Foshan.

But still there is no money back home trying also friends, relatives, always promise me but still never fullfill. […] I know that time is against us. My decission now is to surrender myself. If things does not go the right way, is better than to be hidding always without peace of mind, harrastment from the land lord. […] Because the more I stay like this, the penalty will increase so to end everything. And to know what have to be must have to be.

Vegas finally managed to get money for the fine and return ticket and fine. Still, he had to spend several months in a prison:

So i was taking to one room all my fingers were taking. Palm hand and my eyes and pictures […] One officer brought cuff and cuff my left hand. Later i was escorted by four officers on a van to the detetion center. Upon arrrival to that place I was taken to one room where they told me to remove all my belonging and to take off my clothes be naked, then they brought me there uniforms and i was taken pictures, then they take me to my cell room number 10. 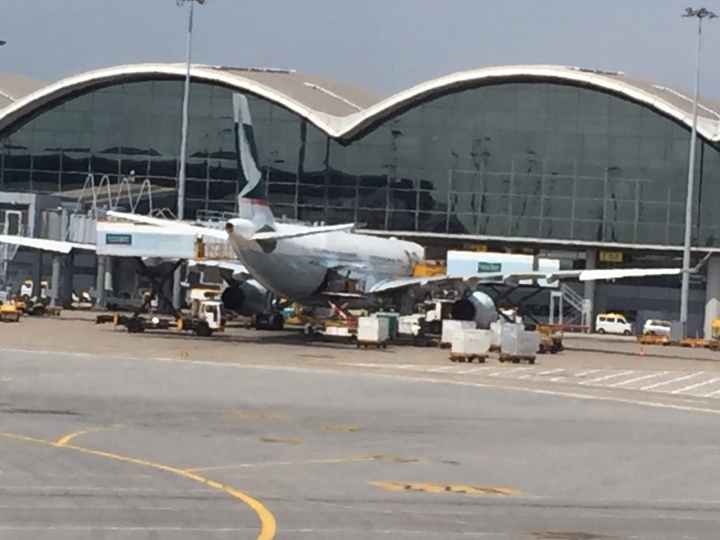